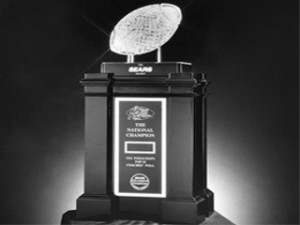 And so it is upon us once again. College Football Season. Christmas come early for so many of us. What any one of us would do or give up — 2 weeks worth of vacation time / Christmas or birthday presents/ that new car we hoped to buy / the Vegas trip with the boys that our wives and girlfriends “promised” we could go on this year– for the chance for our Laundry Liaisons of the Gridiron to hoist that prestigious Crystal (foot) ball up in the air. And the great thing about this year is that there are no one or two teams that everybody loves.

There seems to be a hope and glitter in most every college football fan’s eyes for this season. We could easily have our first back-to-back national champs since USC did it in 2003-2004. (Or did they really since this whole scandal approached them — thanks Reggie! –and USC did not even really play for the championship in 2003. But I digress.) Or could we have the first Non-BCS conference team hoist that trophy? I’m sure some angry hillbilly from Norman is waiting for that with his hunting rifle so he can blow it to smithereens. “Damn you Statue of Liberty! I mean fake Statue of Liberty!”